Excellency, Colleagues, Ladies and Gentlemen, Good morning and Good afternoon to all,

Thank you for hosting this important discussion and for inviting me to reflect on Lebanon, and on issues of women, peace and security at this critical moment for the country.

Let me begin by saying that I believe that without addressing gender equality and women’s rights issues in Lebanon, we will not be able to sustainably and genuinely address the current crisis that the country is facing. I believe this for two primary reasons:

First, because gender inequality in Lebanon is uniquely intertwined with political, sectarian and social structures.

And second because women in Lebanon are at the forefront of all current peace-making initiatives: Across the country, female politicians, female front-line responders and female peacebuilders are working to find a common ground, looking for areas of compromise and building platforms for dialogue.

Without weaving women’s rights and gender equality into the work that this Group undertakes to support Lebanon, we are missing an important opportunity to address potential drivers of future instability.

The current crisis facing Lebanon is driven by a complex set of internal and external factors. In many ways, it has brought to the fore the vulnerabilities of Lebanon’s confessional system, resulting in a peculiar relationship between the individual, the sect and the State and exposing weaknesses in the social contract whereby the State lacks the ability to extend its authority throughout the country, and to deliver on much-needed governance reforms, services and rights. This governance gap has in turn given ample room for the flourishing of Lebanon’s sectarian system, sometimes to the point of clientelism and divisions.

The challenges of the sectarian system have been recognized repeatedly by different Lebanese leaders, the international community and more recently, throughout the 2019 protests in which the Lebanese articulated their dissatisfaction with the political system. The need to transcend sectarianism in Lebanon is enshrined in the 1990 Taef agreement that ended the Lebanese War – but those provisions have not been implemented, which is perhaps an indication of how difficult a shift away from sectarianism would be.

I explain this because I believe that aspects of Lebanon’s confessional system underpin both the weakness of the State in Lebanon and gender inequality. Lebanon’s confessional system is based on a complex set of personal status laws that bind citizens to their confessional leaders and structures while codifying gender inequalities. These laws contribute to the perpetuation of social norms that see women as under the authority of men. They grant women unequal civil status, diminish their social and economic rights, and relegate them as secondary to men in all matters of marriage, divorce, inheritance, custody and more. These laws reinforce patriarchal social norms by concentrating power (over the intimate decisions of women) in the hands of religious leaders and male family members, diverting authority away from the State.

Moreover, these gender discriminatory social norms are further accentuated when considering Lebanon’s history of violence and conflict. They contribute to a social system that values power, violence and dominance – too often defined as male social traits - over compromise, understanding, empathy, compassion and dialogue – defined in contrast as female social traits. The result of this is both women’s marginalization from politics and public space, but also the fueling of a cycle of conflict and instability.

So, what is the impact of these multiple layers of discrimination, dependencies, conflict and crisis on women today in Lebanon?

The current multi-faceted crisis in Lebanon is happening against a backdrop of deep gender inequalities. Standing at 145 out of a total of 153 countries, Lebanon has one of the highest overall gender gaps in the world, and amongst the lowest rates of women’s political participation and labour market participation. As the national currency continues to free fall, poverty and food insecurity rise, fuel and electricity shortages deepen, gender inequalities are equally growing at an alarming rate.

While prior to the current crisis less than one third of women were participating in the labour market, UN Women estimates that a further 14-19% of this group have left the economy over the last year. Data from national institutions and civil society organizations also demonstrates a significant increase in gender-based violence across the country, particularly among Syrian refugees and migrant workers, and this has come tagged with an increase in unpaid care work. Politically, women make up only 4.6% of the parliament, and under 5% of all security institutions while no woman has ever been invited to a formal political dialogue process in Lebanon.

Despite this dramatic downward slide, there is still no decisive political action to come together and salvage the country: the current Government has been in caretaker mode since August last year and efforts to form a new Government have been stalled due to conflicting political demands since October.

Lebanon needs a Government that is competent, empowered, and representative of its people – naturally, also women! The longer Lebanon is without a government, the deeper this crisis becomes. And the UN has repeatedly called on all political leaders to put the country first, prioritize its rescue over political power maximization and form a Government. This is key, but only the beginning, to tackle the reform agenda that must accompany Lebanon’s recovery and reconstruction.

Against this dire outlook, there is still some hope to see this crisis through.

In September 2019, Lebanon adopted its first National Action Plan on Women, Peace and Security, setting out an inclusive approach to issues of peace and security. The national action plan sets out, inter alia, agreed actions to increase women’s participation in decision-making at all levels, including in the security and defense sectors. It also agreed to strengthen women’s participation in conflict prevention, in countering violent extremism and in the promotion of social cohesion, to contribute to sustainable peace in Lebanon.

Despite the many challenges facing the country, the adoption of the National Action Plan shows a potential for change and is the basis for the glimmer of hope that I hold. It has remained a key framework for action and tangible results have already been achieved. These include a significant increase of women in the 2020 intake class of Lebanese Armed Forces military cadets, by which women made up close to 50% of last year’s intake class, in addition to the Cabinet’s decision to form the National Commission for the Missing and Forcibly Disappeared – a key demand of the women’s rights movement since 1990.

My hope for change is also based on Lebanese women’s role as ‘agents of change’. The 2019 wave of protests brought a new, or re-awakened, set of actors, calling for an end to corruption, for dialogue and reconciliation, and for accountability. Women were driving forward much of this work, strategically leveraging gender stereotypes to de-politicize and de-escalate tensions but also to call for reconciliation and reform. In doing this, they build on a history of women’s peace activism in Lebanon.

Even today, while no one else is meeting systematically, there is a group of women, representing all political parties and emerging groups in Lebanon, who are meeting every month. They refuse to lose the ground they have so far won. They are passionately committed to working together on issues of peace and security in Lebanon. Defying the stereotype that ‘masculine’ toughness is the only way to do politics, they set an example of striving to find compromise, working within their communities and institutions for reform and peace, using the space they hold to break Lebanon’s current political impasse.

I have also brought to today’s discussion members of our fantastic country team and am pleased to have the Deputy Head of UNIFIL briefing you with me.

The background note you have before you set out concrete actions that the Security Council can take to support work on women, peace and security in Lebanon. My ask is for you to review each action, and where applicable, integrate them into your decisions and workings.

Also allow me to highlight two areas that are particularly important in my view and that have been central to our work.

I will start with the significant achievements of women in Lebanon: Against all odds, and as I already mentioned, Lebanese women have carved out important space for themselves across the political arena, Lebanon’s security forces, the business sector, the media and even in the academia. While their participation rate across these sectors remains modest, taking and holding this ground has been hard fought, and they need our support if they are to continue to maintain these gains in the face of the deepening crisis.

For that, and for the stability of the country, the 2022 elections must take place! There must be clear but strong and warning messaging to the Lebanese authorities that it is crucial that these elections materialize, as a matter of democratic accountability to the people, to the country’s sovereignty and to the constitutional obligations. We will also need all hands-on deck to ensure women are supported not only to run but to win in these elections.

Secondly, to recover from this acute crisis – the United Nations must be front and center in answering the call of the Lebanese people for a paradigm shift.  We can no longer rely on using the same tools that we’ve been using. Progress is stagnating and we can no longer tolerate this impasse.

The negative impact of sectarianism, the absence of accountability and collective amnesia on Lebanon’s past must be tackled. The pathway must be grounded in dialogue, social cohesion, gender equality, human rights and accountability. The ultimate goal is to build a new reinvigorated social contract where people have the opportunity to rethink and shape Lebanon’s future and to make sure that their concerns and needs are addressed, beyond their own confession; a contract where women have the same prospects and opportunities as men. It is the only way to re-establish trust in the political system and to put Lebanon back on a promising path of transformative change.

Your actions and support to this issue are so urgently and vitally needed – not only for women in Lebanon, not only for gender equality in Lebanon, but also for the Lebanese young women and men and their hopes of a broader peace and stability in their country. 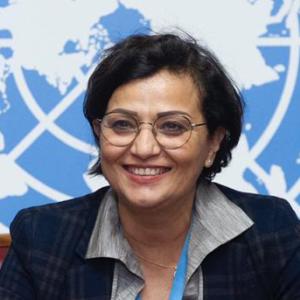