Your Excellencies Ambassadors to Lebanon,

I would like to start by expressing all the gratitude to you Prime Minister for hosting this important event and for your longstanding collaboration in responding to the continued profound impact of the Syria crisis on Lebanon and its people, under the Lebanon Crisis Response Plan (LCRP).

Today is World Refugee Day, which reminds us of the hardship of all those who are fleeing wars and conflicts.

In my various and most recent field visits, I met Syrian children, young and old men and women refugees. They shared the same concerns, the same fears, and the same basic demands. They want to live in dignity. They worry about the safety of their children, their education, and their blurry future.

In the Bekaa for example, I saw first-hand the harsh living conditions in the settlements and met young Amani and Aya, and many others whose dream is simply to go to school. They shared with me their sufferings and their yearnings. I was shaken by the magnitude of the crisis’ impact on their life on all fronts… by seeing an entire generation deprived of education, opportunities, and tools to build a brighter future.

Today’s event is an opportunity to thank our long-standing partners, for their steady commitment, great dedication, and unwavering support to reaching many people under the LCRP and providing them with life-saving assistance. However, the continuation of this work requires greater effectiveness to make real progress on access to basic services, education, and livelihoods for both refugees and host communities.

The LCRP is our collective responsibility to address the continuing impact of the Syria crisis on the people. It speaks to the plight of millions of refugees and host communities, particularly those hardly hit by the compounded crises, and speaks to the heart of our primary mission to Leave No One Behind.

The LCRP gives us the blueprint to respond to these increasing and unfolding needs. It is an important multi-stakeholder response, co-led by the Lebanese Government and by UNDP and UNHCR, and engaging a wide range of partners, including local and international NGOs, donors, and academic institutions. This year, the number of LCRP partners appealing under the plan for 2022 has increased to over 125 organizations, speaking to the growing needs of refugees and their host communities.

More than eleven years passed since the start of the crisis in Syria, and the impact of the war continues to reverberate in Lebanon, particularly on its economy, institutions, host communities, and the people at large. But the context of Lebanon has significantly changed. The country is now facing an unprecedented economic and financial crisis that is weighing heavily on the Lebanese people, as much as on refugees and migrants, hitting hard on the most vulnerable.

Although we were unable to reverse a downward trend in increased humanitarian needs, we were able with our partners and the generous support of the donors to lessen the impact of the multiple crises on the refugees and host community population, by ensuring continued assistance and service provision. As far as funding is concerned, and although 56% of the $2.75 billion appeal was mobilized in 2021, the LCRP remains one of the best-funded refugee appeals in the world.

With this funding, over USD375 million was injected into Lebanon’s economy through cash-based interventions that supported around 2.5 million Lebanese host communities, Syrian refugees, and Palestine refugees.

To respond to the growing food needs, a total of 2.1 million individuals from all population cohorts were provided with food assistance. To help the most vulnerable meet their basic survival needs, more than 290,000 economically vulnerable households across different populations were provided with regular, unconditional, and unrestricted cash grants.

All the more, nearly 2.3 million subsidized health consultations were provided through Primary Healthcare Centres, and 545,000 non-Lebanese and Lebanese children were enrolled in public schools while more than 600,000 people were provided with access to adequate and safe water.

To preserve social stability, more than 119 municipalities were supported in providing basic services and reducing resource pressure in high-risk communities. And as part of boosting people’s livelihoods, cash and in-kind grants were offered to 3,505 Micro-, Small and Medium-sized Enterprises (MSMEs) and cooperatives. The list is exhaustive to include protection and prevention services for the most vulnerable on issues related to Sexual and Gender-Based Violence.

While these may seem good results under the LCRP, the needs have significantly increased this year (in 2022) with 3.2 million Syrian refugees, Palestine refugees, and Lebanese host communities, estimated to be in dire need of humanitarian assistance. To elaborate on this deplorable reality, and while nine out of ten Syrian refugees are still living in extreme poverty, poverty levels have also drastically increased among the Lebanese host communities, with more than half of the Lebanese population living now in poverty.

We cannot afford to abandon refugees to despair and hopelessness, nor to leave their hosts to take on the burden alone.

Our joint work must continue and the LCRP is now needed more than ever to meet the increasing needs of the most vulnerable Syrian refugees and host communities and reach the furthest behind.

In 2022, the LCRP will maintain four key strategic objectives in line with the work done in previous years:

First, to ensure that all assistance guarantees and promotes the safety, protection, and dignity of all host communities, displaced persons from Syria, and Palestine refugees. Through this, we recognize that the imperative of protecting women, girls, boys and men, lies at the heart of all humanitarian action.

Second, to provide life-saving emergency assistance to all targeted populations under the plan, in a timely manner.

Third, to support the provision of services through the national system, recognizing the increasingly overwhelming needs for services and the impact that the Syria crisis continues to have on Lebanon’s public system.

Fourth, to expand the livelihood opportunities, mitigate the environmental effects of the Syria crisis on host communities, and defuse tensions in the areas of operation of the LCRP.

In doing so, the response plan takes an integrated approach to addressing the needs of both refugees and host communities through a combination of humanitarian, stabilization, and development interventions, including a focus on the maintenance of service provision. In the current context, this approach remains essential!

At the regional level, the 2022-2023 LCRP remains an integral part of the regional response to the Syria crisis, given that Lebanon constitutes an important chapter of the Regional Refugee and Resilience Plan (3RP) that is led by UNHCR and UNDP. Very briefly, this regional plan sets out an integrated response to the humanitarian, protection, and assistance needs of Syrian refugees and the impacted host communities, institutions, and people in the five countries hosting displaced Syrians in the region.

We have also revised the Emergency Response Plan (ERP) that we launched in August last year, propelled to meet the growing humanitarian needs of an increasingly large number of vulnerable Lebanese, Palestine refugees in Lebanon, and migrant. We are also working on strengthening complementarity between the LCRP and the ERP.

This is also connected to the United Nations Sustainable Development Cooperation Framework that I recently signed with His Excellency the Prime Minister, in which we recognize the growing humanitarian needs in the country but raise the alarm about the need to invest in sustainable solutions that address the root causes of Lebanon’s compounding crises and put the country back on track to development. Through this framework, we aim to strengthen the nexus between development and humanitarian and peace nexus and the existing and ongoing cooperation between the UN and Lebanon to build the foundations for a prosperous, stable, and inclusive Lebanese society, where no one is left behind.

The LCRP is also fully aligned with the priority outcomes of the international donor conferences, including the Brussels VI conference on Syria that took place last month to ensure continued international support for Syrian refugees and their host communities.

I have always been amazed by the enormous generosity of the Lebanese people who have hosted refugees at a time when they have been struggling with their own vulnerabilities. The world owes the Lebanese not only out of gratitude but of shared responsibility.

Now more than ever, we need international cooperation and stronger responses for the refugees. But what we need most are sustainable solutions to this unfolding crisis, solutions that meet the legitimate aspirations of all. 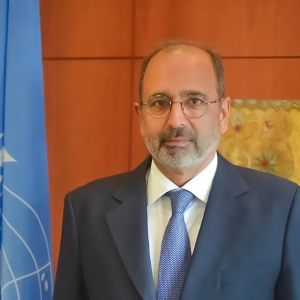